Department ╣23. Construction and Technology of Electronic and Laser Equipment

At present the Department is a RussiaÆs leading training center of technologies, with the staff of 8 Doctors of Engineering  and 20 Candidates of Engineering.

The laboratories of instrumentation and modern technologies are integral part of the training process.

Head of the Department
A. R. Bestugin

A glimpse of history


The Department of Micro- and Nanotechnology of Aerospace Instrumentation was founded in 1946. The first head of the Department was P. I. Bulovsky, Doctor of Engineering, Prof.

The Scientific Research Laboratory was formed under the direction of G. K. Ulianov in 1957.

The stuff and students of the Department investigate into acousto-electronics, acousto-optics and optical information processing fundamentals and application.

The findings are presented annually at various international and national conferences, symposia, forums, published in both foreign and Russian journals.

The Department has received a number of grants for the research and scientific activities. 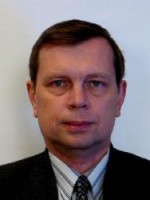