Anniversary of the ‘Belt and Road’ Aerospace Innovation Alliance (BRAIA) 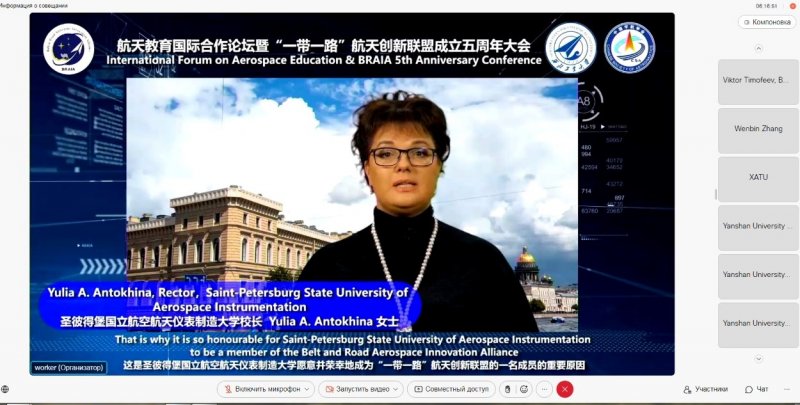 On April 22, the international Belt and Road Aerospace Innovation Alliance (BRAIA) celebrated its fifth anniversary! The Alliance was founded by Northwestern Polytechnical University (NPU) and Chinese Society of Astronautics (CSA) as a non-profit organization comprising universities, research institutes and academic organizations developing the aerospace industry worldwide. At the moment, BRAIA consists of 74 organizations from 22 countries. SUAI joined the Alliance from the very beginning of the foundation of BRAIA in 2017 and was noted in the list of its most active participants over the years.

The Alliance held its anniversary in an online format, bringing together more than fifty representatives of partner organizations on the Webex platform. SUAI prepared a congratulatory message in which Rector Yulia Anatolyevna Antokhina noted the importance of BRAIA's mission in expanding international cooperation in the field of aerospace technologies and their applications and wished new achievements, bright discoveries and resounding victories to all members of the Alliance.