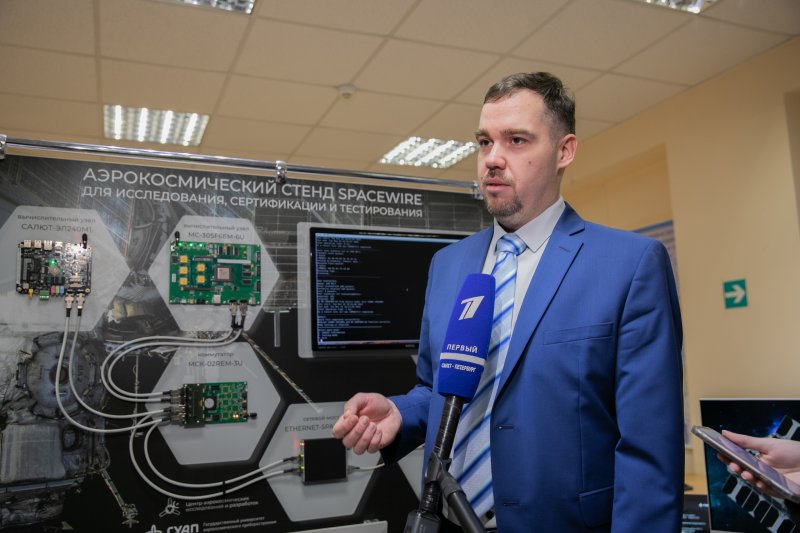 On November 22, the Aerospace Research and Development Center was inaugurated at the State University of Aerospace Instrumentation. The Center combines several advanced laboratories and its  own small innovative production.

The creation of the Aerospace R&D Centre in SUAI is aimed at joint research and experimental development of innovative communication technologies, modeling, expert analysis, creation and construction of computing and communication networks for real projects in the field of aviation and space.

– Today we are solemnly opening the Center for Aerospace Development and Research. This is a great start for the development of a new innovative platform of our university. We are confident that it will unite students and teaching staff, and the results obtained during the work will be of interest to our partners and our country as a whole to ensure its technological sovereignty. The goal of the Center is to create a working infrastructure for the development of a new generation of aircraft, – said the rector of SUAI Yulia Antokhina at the opening.

The Aerospace R&D Centre consists of three key components: the Research and Development Unit, the Aerospace Knowledge Factory and the Small Innovative Production. The Center has come through the way from a number of independent departments of the university, including the key scientific laboratories, to an autonomous research center offering its scientific and engineering solutions to the market. Our own production laboratories will be involved in creating industrial prototypes of the developed devices.

– It will be a multi-functional center, where highly qualified engineers will be trained and developments in the field of new onboard networks and new communication technologies will be carried out. We are also creating a small innovative production that will allow us to interact more closely with the industry. The tasks that we set for ourselves are long-lasting. These are technologies aimed at creating a new infrastructure, not only solving primary tasks, but also conducting completely new scientific research," said Valentin Olenev, Director of the Aerospace Research and Development Center of SUAI.

After the grand opening of the Center and the signing of the order on the creation of a new structure of the University, the guests were invited to the exhibition of achievements of Aerospace R&D Center employees, where they presented real on-board equipment based on the technology of high-speed onboard SpaceWire and SpaceFibre networks. It will increase the speed and simplify the exchange of data on board spacecraft, satellites and manned spacecraft. Also, the participants of the event were shown a prototype of the rover created by students. Its chassis can be controlled from a smartphone, and its robotic arm will allow you to work out a number of tasks. In order to assess what information exchange will be like on the network space equipment will be installed on this prototype. The guests of the event showed high interest in the results of the orbital experiment, which SUAI conducted jointly with its partners.

– SUAI Aerospace Research and Development Center will become a means of communication between the university and industrial enterprises. The Center’s areas of focus are relevant, in demand and promising. Its work will make it possible to form new staff for the aviation and space industry. By the way, I can say with confidence that SUAI is a true talent foundry. So, in the Leninets company, 70-80% of employees are SUAI graduates, – said Vadim Polyakov, head of the Research Department No. 400 of PJSC Central Scientific Production Association 'Leninets'.

Now, at the SUAI Aerospace Research and Development Center, researchers have the opportunity to design an on-board network from the very beginning. The interconnection of the educational part and the research part will be ensured by visual assembly of the network, automated completion, routing through the network and modeling the operation of this network even before the equipment has arrived at the enterprise. The Center will combine all the university's competencies in the field of aviation and space, so that university scientists can create truly breakthrough inventions.