Results of the International Olympiad "Economics and Management - 2022" 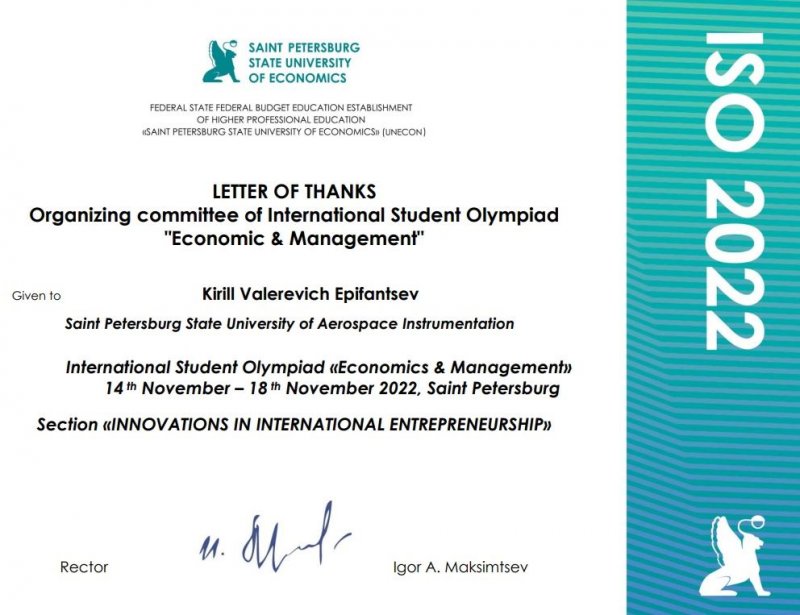 From November 14th to 18th, 2022, the 34th International Student Olympiad (ISO) "Economics and Management - 2022" was held at St. Petersburg State University of Economics in a remote format, where tool part 747 participants: students and leaders from Russia and other countries.

Since 2002, the head of the ISO project has been the Honored Worker of the Higher School of the Russian Federation, Head of Department for Audit and Internal Control, Doctor of Economics, Professor Natalia A. Kamordzhanova.

This year 14 sections were presented at the competition.

The Olympiad was held in 2 stages: at the first it was necessary to solve the test in English, at the second, all participants were united with teams from other universities and had to create a project on a given topic.

According to the results of the 1st and 2nd rounds, the student of the M061 group Arina Konovalova was awarded the Diploma "For the Feasibility of the Proposed Solution in an International Environment". Associate Professor Kirill V. Epifantsev was awarded with gratitude for his help in arranging and holding the Olympiad.

All students received participation certificates. The significance of this Olympiad is of great importance for the collaboration of students of different universities, the exchange of experience and knowledge in the field of innovation.