The Department specializes in the theory of law and state. The R&D of the academic staff is integrated into the educational process and the papers published.

The Department studies into the law philosophy in Russia, law practice and common law, Muslim law, Russian history and theory of law.

The Department trains Bachelors and Masters in Law, Specialists in Customs Law, postgraduate programs are offered for advanced research.

The Department participated in the All-Russian Scientific Conference in Kizlyar (Republic of Dagestan) and in International Scientific and Practical Conferences in Izhevsk (2011), St. Petersburg (2013), and Kizlyar (2014).

Since 2005 the Department is involved in the International and European Law Congresses in Sweden, Spain, Poland, Check Republic, and Germany, with reports published in the Proceedings.

Prof. E. V. Kuznetsov is an invited lecturer at the Lund University (Sweden), the University of Valladolid (Spain), Uniwersytet Śląski w Katowicach (Poland), Charles University and Masaryk University in Brno (Check Republic). His book on the theory of state and law published in French, English, and Spanish was awarded a prize in Sochi.

The Department of the Theory of Law and State was established in 1996 headed, since then, by Prof. E. V. Kuznetsov.

Prof. E. V. Kuznetsov is considered among the founders of law philosophy, a new branch in modern law, in Russia. His achievements are listed Outstanding Academic Lawyers (the second half of the XX century): the Encyclopedia of Biographies. Moscow, 2006, History, Events, People. St. Petersburg, 2008, Builders of the Future. SUAI Scientific Schools. St. Petersburg, 2008. 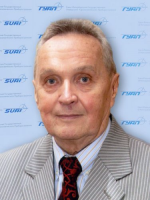